What on earth could be more luxurious than a sofa, a book, and a cup of coffee? 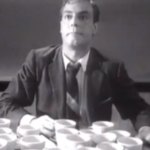 Do you worry that you drink too much coffee or consume too much caffeine? Coffee actually has lots of health benefits, but like anything else, moderation is best. You wouldn’t want to end up in “coffee rehab” like the hero of “Java Junkie,” would you? This great short comedy, a cautionary tale about a coffee-swilling “java junkie,” premiered on “Saturday Night Live” in December 1979 and became a cult classic. The film stars Peter Aykroyd as Joe, a regular guy who’s down on his luck and tries to drown his sorrows in coffee.