I never drink coffee at lunch. I find it keeps me awake for the afternoon. 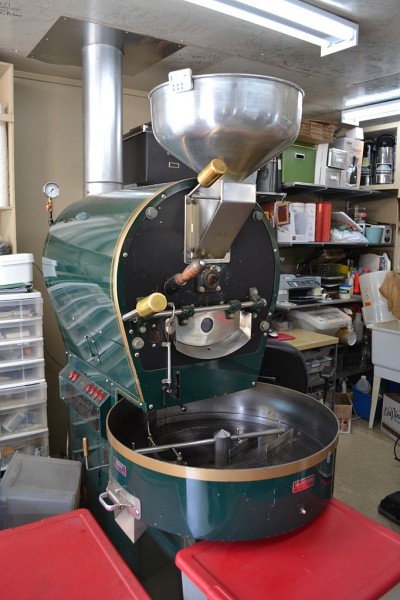 What’s your favorite coffee roast? Dark? Light? Somewhere in between? Here’s a “coffee 101” guide to coffee roasts from light to dark.

The degree to which coffee beans are roasted is one of the most important factors that determine the taste of the coffee in the cup. Before roasting, green coffee beans are soft, with a fresh “grassy” smell and little or no taste. The coffee roasting process transforms these raw beans into the distinctively aromatic, flavorful, crunchy beans that we recognize as coffee.

Other factors of course enter into the complex equation that determines your coffee’s taste. Two coffee varieties, from different countries of origin or grown in different environments, are likely to taste quite different even when roasted to the same level (especially at light to medium roast levels). The age of the coffee, the processing method, the grind, and the brewing method will also affect the taste. But the roast level provides a baseline, a rough guide to the taste you can expect.

The most common way to describe coffee roast levels is by the color of the roasted beans, ranging from light to dark (or extra dark). As coffee beans absorb heat in the roasting process, their color becomes darker. Oils appear on the surface of the beans at higher temperatures. Because coffee beans vary, color is not an especially accurate way of judging a roast. But combined with the typical roasting temperature that yields a particular shade of brown, color is a convenient way to categorize roasting levels.

Roast level preferences are subjective. The roast level you like may depend on where you live. In the United States, folks on the West Coast have traditionally preferred darker roasts than those on the East Coast. Europeans have also favored dark roasts, lending their names to the so-called French, Italian, and Spanish roasts that dominate the darker end of the roasting spectrum.

Roast names and descriptions are not standardized in the coffee industry. Starbucks, for example, uses its Starbucks Roast Spectrum ™ to categorize its coffees within three roast profiles: Starbucks® Blonde Roast (“light-bodied and mellow,” like its Veranda Blend™), Starbucks® Medium Roast (“smooth and balanced”), and Starbucks® Dark Roast (“fuller-bodied and bold”). California-based roaster Rogers Family Company, on the other hand, has five roasting levels ranging from medium to extra dark. (Its San Francisco Bay Fog Chaser blend, for example, is a Full City medium roast coffee.)

In general, though, we can categorize the most common coffee roasts from light to dark as follows:

Light roasts are light brown in color, with a light body and no oil on the surface of the beans. Light roasts have a toasted grain taste and pronounced acidity. The origin flavors of the bean are retained to a greater extent than in darker roasted coffees. Light roasts also retain most of the caffeine from the coffee bean.

Light roasted beans generally reach an internal temperature of 180°C – 205°C (356°F – 401°F). At or around 205°C, the beans pop or crack and expand in size. This is known as the “first crack” (for the “second crack,” see below). So a light roast generally means a coffee that has not been roasted beyond the first crack.

Some common roast names within the Light Roast category are Light City, Half City, Cinnamon Roast (roasted to just before first crack), and New England Roast (a popular roast in the northeastern United States, roasted to first crack).

Medium roasted coffees are medium brown in color with more body than light roasts. Like the lighter roasts, they have no oil on the bean surfaces. However, medium roasts lack the grainy taste of the light roasts, exhibiting more balanced flavor, aroma, and acidity. Caffeine is somewhat decreased, but there is more caffeine than in darker roasts.

Medium roasts reach internal temperatures between 210°C (410°F) and 220°C  (428°F) — between the end of the first crack and just before the beginning of the second crack.

Common roast names within the Medium Roast level include Regular Roast, American Roast (the traditional roast in the eastern United States, roasted to the end of the first crack), City Roast (medium brown, a typical roast throughout the United States), and Breakfast Roast.

Medium-dark roasts have a richer, darker color with some oil beginning to show on the surface of the beans. A medium-dark roast has a heavy body in comparison with the lighter or medium roasts.

The beans are roasted to the beginning or middle of the second crack — about 225°C (437°F) or 230°C (446°F). The flavors and aromas of the roasting process become noticeable, and the taste of the coffee may be somewhat spicy.

Dark roasted coffees are dark brown in color, like chocolate, or sometimes almost black. They have a sheen of oil on the surface, which is usually evident in the cup when the dark roast coffee is brewed. The coffee’s origin flavors are eclipsed by the flavors of the roasting process. The coffee will generally have a bitter and smoky or even burnt taste. The amount of caffeine is substantially decreased.

To reach the level of a dark roast, coffee beans are roasted to an internal temperature of 240°C (464°F) — about the end of the second crack — or beyond. They are seldom roasted to a temperature exceeding 250°C (482°F), at which point the body of the beans is thin and the taste is characterized by flavors of tar and charcoal.

Dark roasts go by many names. As a result, buying a dark roast can be confusing. Some of the more popular designations for a dark roast include French Roast, Italian Roast, Espresso Roast, Continental Roast, New Orleans Roast, and Spanish Roast. Many dark roasts are used for espresso blends.

So there you have it — a short guide to the common coffee roasts from light to dark. To summarize the differences, in addition to the color gradations:

Ultimately, it’s all about the taste, the flavor, the aroma. You may prefer a lighter roast in the morning (with more caffeine) and a darker one later in the day. Coffee, including the optimal roast level, is a personal preference. What’s yours?