Should I kill myself, or have another cup of coffee? 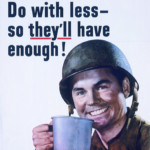 During World War II, the U.S. government found it necessary to restrict civilian coffee consumption to about half its normal level. Despite record coffee production in Brazil and elsewhere, the war disrupted coffee shipping. The government imposed rationing to make coffee available to all citizens on an equal basis, while giving priority to the needs of the military. Americans did their patriotic duty but were relieved when rationing ended in mid-1943.